Shlomo participates the meeting of judiciary for Investigation in dohuk

Shlomo participates the meeting of judiciary for Investigation in dohuk

Shlomo members, kamil raffu, shabah raffu and remail somo participated the meeting of judiciary for investigation and gathering evidencies of genocide which was held in dohuk in Nineveh plain and sinjar.

The meeting was attended by the minorities, yazidiz, turkomans and kalis. The meeting discussed presenting complaints and recording the complaining who suffered Daesh acts and its crimes committed against these minorities reaching at establishing an Iraq court to start these violations and crimes. Shlomo organization had presented a suggestion to mandate investigates to arrive at the place of forcibly displaced so as to raise the heavy burdon on them by downloading expenses of their travelling to dohuk to register their complaints and statements 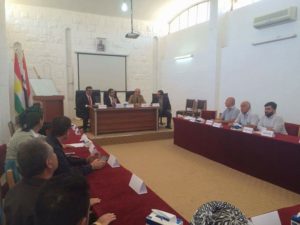